It seems so strange, but a DVD drive may refuse to open the first time, even the second or third, until it finally opens! The light flickers, it tries to open, but it seems like something inside is stuck. Do not try unless you are really desperate to find programs or services that impede the ejection; most probably this is not a software problem.

If DVD drives sit for a long time without being opened they tend to get sticky, as if their door were glued. This means, if you decide to use it a little more, it may return to normal operation! There may also be a problem with the gear; then you hear the motor trying to open for a few seconds, until pressure stops and the operation times out.

Perhaps the drive’s rubber belt, left in a position for a long time, is fixed in that position against the gear. There may also be a problem with the drive’s connectors. Then you need to remove the side panel off the machine and fix the connector. Maybe one of the connectors does not make a proper contact.

In my case the drive refused to open initially, but it did open after several attempts. Then I decided to open and close it at least once each day to keep it “in shape”, and it now works! A more permanent way to fix it, would be to replace the belt. Before you search for a belt on ebay you may like also to try this method to repair the old one. 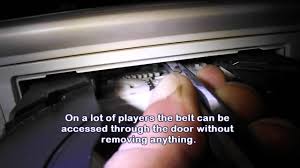 Open the tray and remove the belt, then put it in boiling water for 15 minutes. Let it dry and put it back on your DVD. In most cases this should restore it to its former condition, otherwise you need to get a new one or try using instead a common rubber band you can find anywhere. Just make sure its dimensions are close to the original belt. I assume that you know also about the manual way to release the tray in case of emergency. You need to push a thin wire into that little hole at the front of the drive.